The Victorian period coincided with the reign of Queen Victoria from 1837 – 1901 and is often associated with romance and grandeur, in art, literature and music as well as jewellery

As affluence spread and manufacturing capabilities grew, the jewellery industry flourished meaning more and more people were able to afford and wear jewels.

Queen Victoria loved jewellery and wore a lot of it, both formal and informal, and naturally the styles of the court were copied by everyone else.

She is credited with inspiring the popularity of snake jewellery, one of the motifs closely associated with the era, after being given a snake ring by Prince Albert on their engagement. 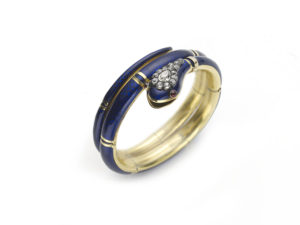 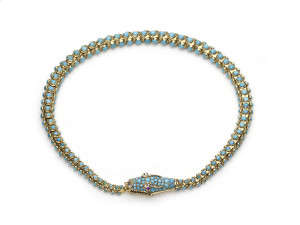 Serpents had long been associated with fertility, creativity and protection and were seen as symbolic of rebirth and renewal.

The ouroboros, a serpent who grasps his tail in his mouth thereby forming a continuous circle, was believed to represent eternity and by extension eternal love.

Rings, bangles and necklaces were all made with coils encircling fingers, wrists and arms in both solid and flexible forms of gold with gem-set and enamel heads and tails.

There is a definite distinction between daytime and evening jewellery during the Victorian period.
Suitable choices for day included coral, seed pearls, tortoiseshell and turquoise with carved shell cameos becoming increasingly popular during the second half of the 19th Century. These were worn both singly and in suites at the neck, wrist and also as brooches, and often depicted classical motifs and characters from Greek and Roman legend.

Clever design would often allow day jewels, particularly earrings and necklaces to be converted for more formal wear once the sun had set with the addition of extra drops or pendants, these are often referrd to as day-to-night jewellery. Other types of jewellery that could be worn in different ways included necklaces that became tiaras once positioned on frames and brooches with detachable fittings and hinged loops that would see them transform into pendants. 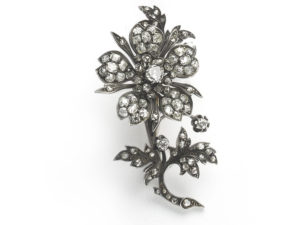 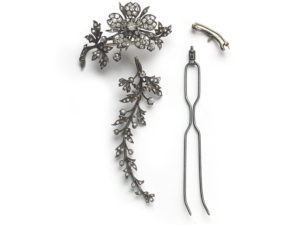 Naturalism was a strong theme throughout the Victorian era with flowers, birds, insects and animals frequently depicted in a number of different styles

From small bar brooches and stick pins with gem-set pheasants and dragonflies or fox heads in carefully engraved and final y painted Essex crystals through to huge diamond corsages designed as sprays of flowers set en tremblant so they moved with the wearer, Victorian jewellery is alive with flora and fauna. 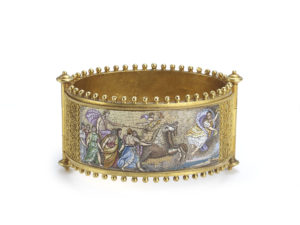 The Grand Tour of Europe. The buying of souvenir jewellery became a popular way of remembering the places visited and Italy in particular produced a wide variety of jewellery for the tourist market.

Fringe necklaces made from native corals, cameos carved from lava, bracelets and brooches depicting cultural landmarks in micromosaic or floral arrangements in pietra dura were all popular mementos.

Perhaps the most famous of this type of jewellery was made by Castellani in Rome who was producing intricate and detailed goldwork pieces in an archaeological revival style that became very fashionable in England and even America.

Towards the end of the 19th Century there was a reaction against the mass produced jewellery that had been flowing out of the Birmingham factories during the last few decades. Whilst it had greatly contributed to the widespread availability and increased affordability of jewellery, especially for the emerging middle class, there were those who started to seek a return to the idealised values of individual craftsmanship. It was out of this growing sentiment that the Arts and Crafts movement developed with a focus on unique handmade pieces valued for their original designs. Materials were regarded as of secondary importance and the jewellery was typically made in silver with enamel and low cost gems used for decoration and characterised by a somewhat homemade feel.

Whilst similar values were upheld by the Art Nouveau jewellers, their style was quite different and they took the aesthetic to a much more heightened extreme.