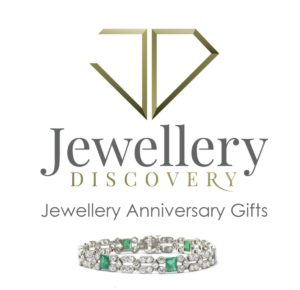 Traditionally each anniversary has a material which represents it, generally starting from weakest to strongest, to signify the strength of the marriage through each passing year.

However, over the years, more items have been added as well as the list having evolved with modern times.

Traditional Anniversary Gifts in the UK 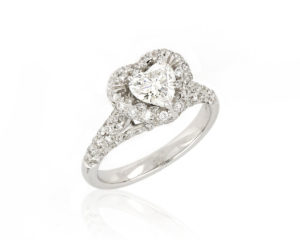 As most marriages start with jewellery – an engagement ring and a wedding ring, you may think it natural that an anniversary gift would be jewellery too.

If you’re looking to gift a piece of jewellery for your special day, then the traditional anniversary gifts of cotton, paper and sugar are not going to be of much use.

Thankfully, there are also gemstones which are typically associated with anniversaries too.

The idea behind gold jewellery for the first anniversary is that the couple are still finding their feet.

Rather than investing in a gemstone in this first year, how about a gold necklace or bracelet? 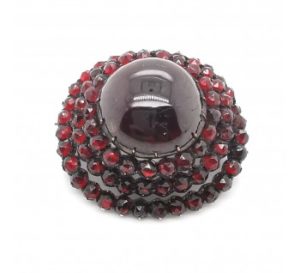 Garnets are often thought of for their beautiful deep red colour but they can, in fact, come in many other colours ranging from a rich red Bohemian garnet to stunning greens garnets such as demantoid and tsavorite garnets.

They can also be found in oranges and browns as well as pinks and purples such as the Rhodolite garnet.

Garnet is a relatively hard stone and can be used in any piece of jewellery from brooches and pendants, to rings and cufflinks. 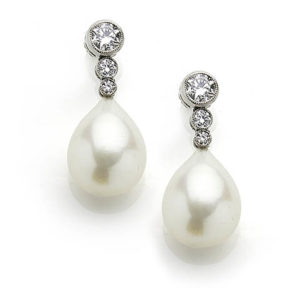 Pearls are one of the most unique gemstones – they are the only one to be formed inside a living creature.

Formed in the shells of living molluscs, they can range in colour from dusky pinks to blues, greys, brilliant white and even black.

Their naturally lustrous appearance and smooth surface mean that they don’t need to be specially
cut or polished to increase their beauty.

Pearls can be natural or cultured; natural pearls are more expensive than cultured but that is about the only difference.

Cultured pearls are a beautiful, luminescent product of nature, growing in the same way as natural
pearls. 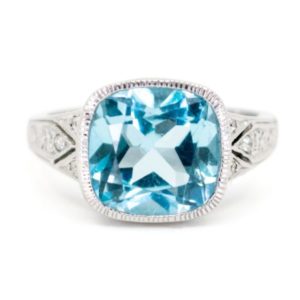 Topaz can be found in colours other than blue such as purples and pinks as well as a red-orange brown.

The deeper blue shades which are known as “London Blue” and “Swiss Blue” are caused by irradiation and heating.

Topaz measures 8 on the MOHs scale of hardness, making it a hardy stone and only two down on the scale from diamonds. 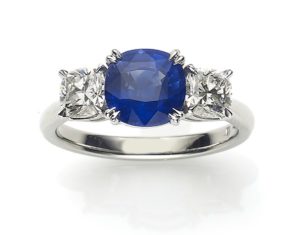 Blue is the colour for fidelity and sapphires are said to bring peace and happiness to their wearers, making them another perfect choice for anniversary jewellery.

They also used to be the preferred choice for engagement rings and are often referred to as the stone of stones.

Sapphires come in a variety of hues, but the most popular is the brilliant, deep blue that we all picture when we think of sapphires. The deeper the blue, the more valuable the sapphire. 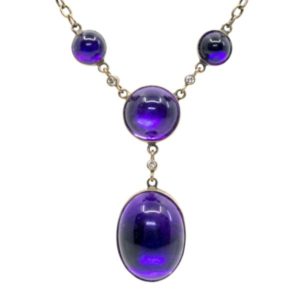 Amethyst is a form of quartz which is found in hues of light pink to dark purple. However, it can be found in other colours such as green.

The best varieties of amethyst are often found in Siberia, Sri Lanka, Brazil and the Far East.

Some stones may be heat treated to enhance their colours.

Amethyst measures 7 on the MOHs scale of hardness. 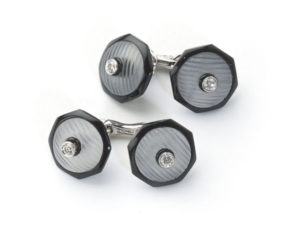 Onyx, a variety of chalcedony, is a hard and durable stone which is often used for carving and is popular in men’s jewellery. Making this anniversary a great opportunity for men to get jewellery as a gift!

A bold onyx ring or a pair of onyx cufflinks are a great way to mark the occasion.

For her, black onyx paired with diamonds and white metal makes for a striking statement. 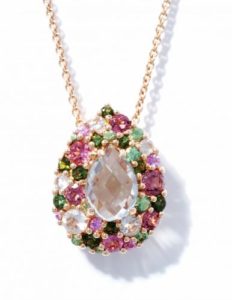 Tourmaline comes in a variety of dazzling colours, so no matter what your favourite colour is, you can almost certainly find it in tourmaline.

Even if you or your loved one have different favourites, you can probably find them both in this one gem. 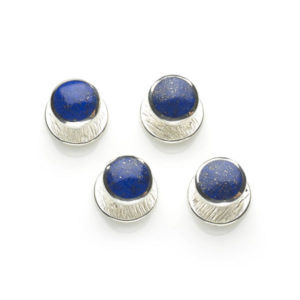 The name Lapis Lazuli is derived from “lapis” the Latin word for stone and “Azula” which in Arabic means “blue”.

Many people refer to it simply as “lapis” for short.

It is known for its beautiful, intense blue colour and sparkling gold flecks.

It is said to be one of the first gemstones ever worn as jewellery and is believed to have been around for over 6,500 years. 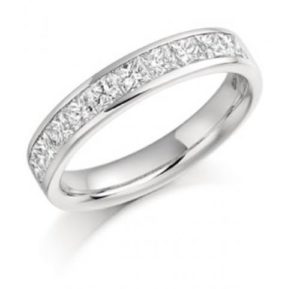 Diamonds have been believed to increase their owners’ strength and courage and would sometimes be worn on a king’s armour in battle.

For her, this is the perfect opportunity to add a diamond anniversary band to her engagement and wedding rings.

For him, how about a diamond ring? Or perhaps some diamond cufflinks. 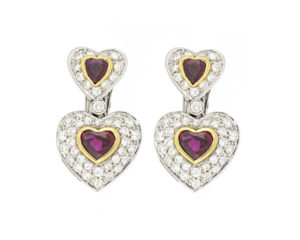 Derived from the Latin word “ruber”, meaning red, rubies are said to bring good health and fortune and are often referred to as the ‘King’ of gemstones. In Medieval Britain, the ruby was often considered to guarantee health, wisdom and a successful love life. 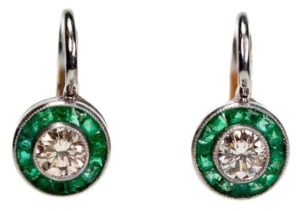 As the gem of Venus, the emerald was believed to aid fertility and has long been associated with love and rebirth.

Formed from the mineral Corundum, Emeralds are a wonderful green and the deeper the colour, the more valuable the emerald is. They are one of the rarest gemstones and are often found with inclusions, however, this doesn’t usually detract from the value unlike with other gemstones such as diamonds. 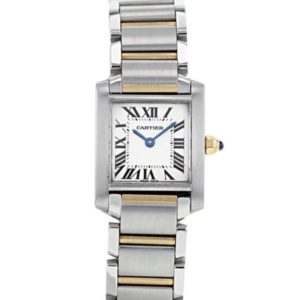 The 25th wedding anniversary is known as the silver jubilee and there’s so much choice available in sterling silver for both him and her.

With so much to celebrate, don’t feel that you need to limit yourself to only silver. Why not embrace the colour, and include white metal watches or white gold or platinum jewellery? 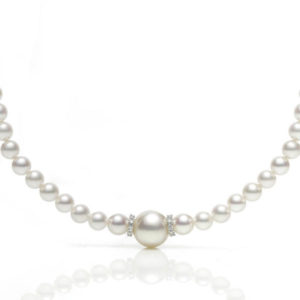 Cultured and natural pearls are both created in layers — a lovely metaphor for the years that have passed and the love that has grown.

The layers are called nacre, and the nacre is what gives pearls their luminescence.

As pearls are also the gem for the third anniversary, why not upgrade this time?

If it was a simple pendant then, maybe a full string this time?

With emerald being one of the classic stones, its no surprise that it comes up on the anniversary list twice.

This is a fantastic opportunity to add to the piece you brought for your twentieth anniversary – if you bought a necklace, you could consider adding a bracelet or earrings to match. 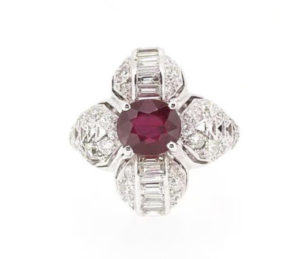 Another repeat, but its no wonder with that wonderful red colour being the colour of love.

How about adding to her collection with a gorgeous ruby and diamond ring? 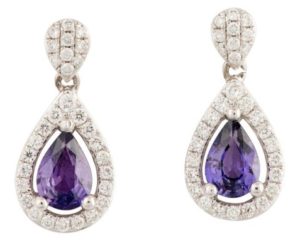 In case you missed sapphire forty years ago, here’s your chance to add sapphire to her collection.

If you already purchased sapphire jewellery, why not add to her collection with a different coloured sapphire? 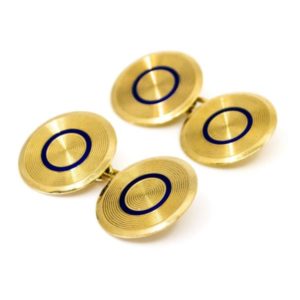 Fifty years is absolutely something to celebrate!

The sky really is the limit with this one, and rightfully so!

For him, how about a gold watch or gold cufflinks?

For her, you could choose a piece in either yellow, white or rose gold. 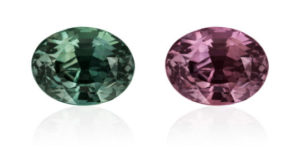 The gemstone alexandrite is named after a Russian Czar.

Alexandrite’s most striking and remarkable feature is its ability to change colour — it appears a purplish red colour in incandescent light, but under fluorescent light or outside light it changes to teal or greenish-blue. 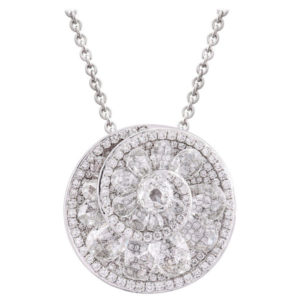 Making its second appearance on the list is Diamond.

Perhaps this is because it is the strongest stone known to man and will stand the test of time, just like your marriage.

You could spoil her with a beautiful diamond brooch, or perhaps a diamond pendant?

Whatever you choose, make sure you celebrate in style – you’ve earned it!

The 70th anniversary is known as the platinum jubilee.

Platinum is a strong white metal that may not have been widely available at the time anyone celebrating a 70th anniversary got married.

Maybe a bracelet or necklace would be the perfect way to commemorate the occasion.