Art Nouveau jewellery developed out of a combination of influences including a backlash against what was perceived as the overwhelming dominance of the diamond, an emerging interest in Japanese art and in particular their representations of nature, as well as contemporary social thinking and interests. Of course the style wasn’t only confined to jewellery; it was evident in all creative art forms from furniture to textiles, ceramics and art. 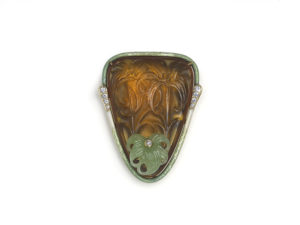 The Art Nouveau period was characterised by fluid lines, organic forms, an appreciation of the female body and a blend of realism and fantasy, Art Nouveau jewellery focused on the value of design and execution over the innate value of its component parts. This means that diamonds are rare and usually only used in minor supporting roles leaving some of the less common gem materials such as ivory, opal, horn and moonstones to shine alongside enamel and sculpted gold to depict images largely drawn from the natural world.
Horticulture and botany were of great interest at this time and with expeditions to the Far East and North and South America bringing exotic blooms back to Europe, so it is not surprising that designers were inspired to imitate them in jewels. Whilst flowers had been a popular inspiration for traditional Victorian jewellers, they had typically been depicted in diamonds and precious gemstones.

Now however the desire was to replicate them much more literally which meant that gems were chosen on the basis of their colour and transparency and enamel was much utilised as it could be made in whatever colours were necessary and applied with a variety of techniques, depending on the effect required. And it wasn’t only flowers in full bloom that were portrayed but also buds, leaves, seeds, wilting petals and bare branches representing nature’s full life cycle as well as the changing seasons. 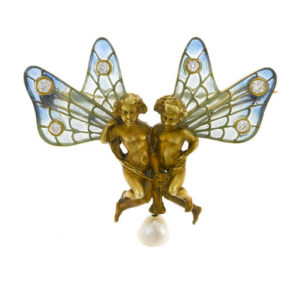 Insects were another popular motif and alongside those with attractive colours and pretty wings such as dragonflies there were also those more ominous looking such as wasps and beetles. In a similar vein, animals such as bats, snakes and sea creatures were frequently used and were often depicted with gaping mouths revealing sharp fangs or with dangerous claws or spiked tails. One of the most original, and to many people disturbing, images of Art Nouveau jewellery was the element of fantasy created by designers who fused these creatures with female figures.

The female form was a widespread motif in itself and was typically portrayed nude with long, flowing hair in a celebration of femininity which many saw as representative of the increasing emancipation of women in society at the turn of the century. However she was also realised in a variety of hybrid forms sometimes just with the addition of a pair of dainty fairy-like wings, at others with arms replaced by huge moth wings, head adorned with antennae or legs replaced with a mermaids tail or lions body.

In one of the most famous pieces of the period by René Lalique, the head and armless torso of a woman, finely carved in green chrysoprase, emerges from the jaws of a gold dragonfly, her huge finely veined articulated wings spread wide in front of the insects frighteningly large clawed arms. This archetypal jewel combines many of the movements themes, not least nature, metamorphosis, sensuality and a darkness that underpinned much at the fin de siècle.
Paris was seen as the centre of Art Nouveau and many of the most famous proponents of the style such as Lalique, Fouquet and Verver were French, indeed the movement took its name from the Parisian gallery ‘Maison de l’Art Nouveau’ which opened in 1895 and was entirely dedicated to this new ‘modern’ artistic style.