Art Deco jewellery is inextricably linked with the idea of the roaring 20’s. With flapper girls in short fringed dresses sporting cropped hair, drinking from champagne saucers and dancing the night away to live jazz. After the sinuous, asymmetric lines and soft colour palette of Art Nouveau jewels, Art Deco did a complete about turn and went in the opposite direction with straight lines, bold geometric shapes and abstract design.

Diamonds reigned supreme both on their own and to prov 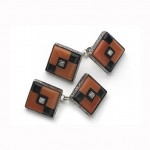 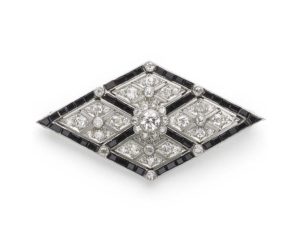 These were used both singly, for example black onyx which created a stark yet chic effect and in bold, vibrant combinations such as red coral, lapis lazuli and jade.

Inspiration came from the shapes found in modern architecture and machine parts and whilst some naturalistic motifs were still in evidence they were typically depicted in a stylised, symmetrical fashion.

Jewellery was also influenced by more exotic motifs resulting from travels to countries such as India, Egypt and the Orient.
The 1922 discovery of the tomb of Tutankhamun sparked a craze for all things Egyptian, re-igniting an interest that had been simmering for decades. Many of the fine jewellery houses took inspiration from both the colours and iconography associated with Ancient Egypt and pharaohs, sphinxes, lotus flowers and especially scarabs, often with outspread wings, became popular motifs. Some designers even went as far as to incorporate original artifacts such as faience amulets, beads and figurines into their jewellery and Cartier were particularly skilled at this. 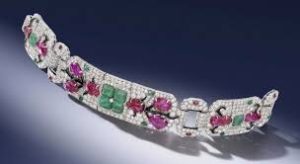 They were also responsible for creating the colourful ‘tutti frutti’ jewels that are synonymous with this period. Jacques Cartier returned from visits to India with large quantities of rubies, emeralds and sapphires all carved in the traditional Moghul fashion into a variety of flowers and leaves. These were then combined with diamonds and set into platinum to make bright, vivacious jewels such as bracelets and brooches. 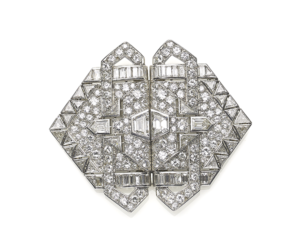 One of the most popular jewels of the period was the double clip brooch which, like many Art Deco pieces, was convertible and could be worn in multiple ways. It was composed of two identical halves fitted together on a frame to make a single brooch and could be worn just as it was or separated and each half worn either singly or together on the lapels of a jacket for instance or the straps of a dress. Another type of dress ornament that was worn widely was the jabot pin which is characterised by having two motifs joined by a long pin which would be hidden behind the fabric when worn, leaving only the jewelled ends on show.
After the war, women found they had increased independence and the changes in fashion reflected this. 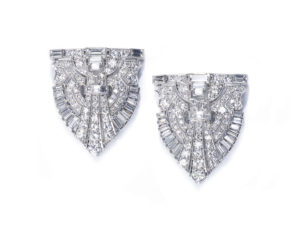 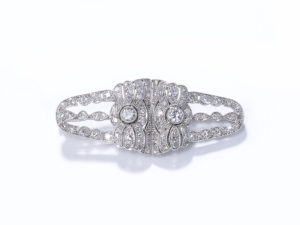 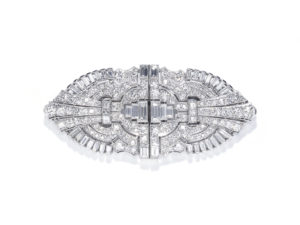 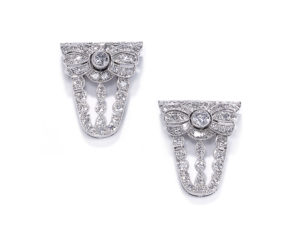 The columnar silhouettes of dresses with square necklines, the jackets that could now be worn with trousers as well as skirts and the sleeveless evening dresses which scooped low both front and back all needed jewellery styles to compliment the new found sense of freedom they conveyed. Necklaces were worn long with a pendant or tassel on the end often referred to as a sautoir, rows of pearls (both real and costume thanks to Coco Chanel) would be wrapped multiple times around the neck and earrings were also long, accentuating shorter hair styles and exposed necks. Bracelets could be very fine lines of round diamonds alternately set with calibre cut coloured gems such as sapphires or rubies; geometric openwork links of diamonds and multi-coloured gems or wide straps pave set with diamonds –all styles were worn in multiples, stacked up the wrists and forearms.

The bold modern look of Art Deco jewellery, characterised by its symmetrical, linear, sleek, designs means that many pieces look as contemporary today as they did nearly a hundred years ago and they remain highly sought after and very wearable. 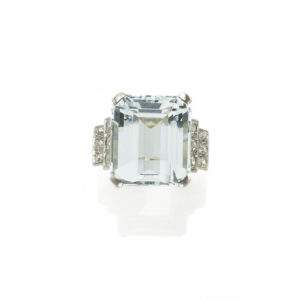 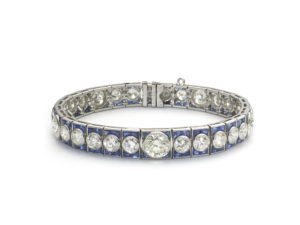 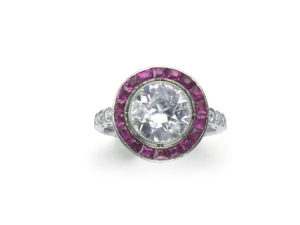