History of the necklace

The most alluring piece of jewellery, throughout history the necklace has portrayed piety but more often provoked passion and in one case gave cause to a revolution. Its form has changed with the fashionable necklines of the day, here is a look at the different types of necklace

Bib necklace from the Latin bibere

The necklace gets its name from a garment worn while drinking, a necklace that extends from the base of the neck downwards forming a triangular or half moon shape.

The form was first seen in ancient Egypt but also appears in tribal adornment, often in leather decorated with small beads or cowrie shells.

A famous example of the bib necklace was made by Cartier for the Duchess of Windsor in 1947, the angular form was set with amethysts, turquoise and diamonds in gold wire. 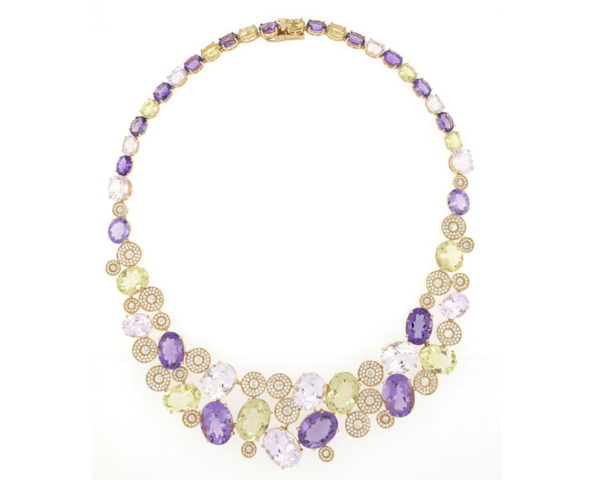 Choker necklace is worn high on the neck, examples include a short string of pearls, or a velvet band with a jewel attached.

In the 18th century an open work jewel set choker worn high on the neck was the height of fashion at the same time as very low necklines on dresses, the wide expanse of bare neck and breast seen as an expression of beauty. The choker returned in the Belle Epoque era C 1900, when small pendants draped from the choker to the base of the neck.

The second reincarnation of the choker was in the mid 1970’s when the hippies adopted the choker, men including Mick Jagger and David Bowie sported chokers and in the 1990s it was Beyonce who set the trend rolling again. 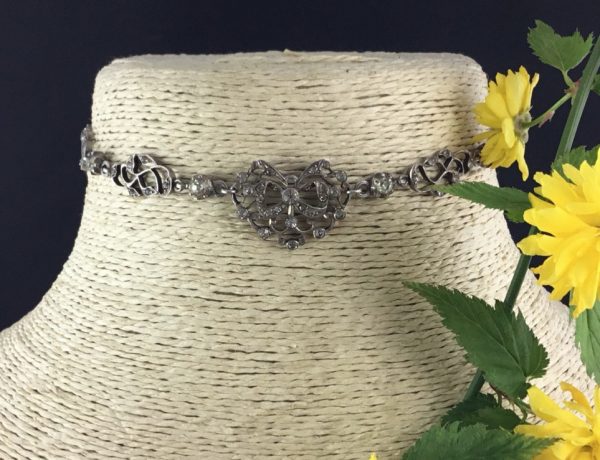 While we know the form of ancient Egyptian necklaces from surviving sculpture and art of the period, no one can be certain what style of necklace was worn by the women of Greek descent who became Queen of Egypt. What we do know is the Cleopatra necklace gained its popularity from the 1960’s film Cleopatra with Elizabeth Taylor playing the role of a sexy and powerful woman. The ‘Cleopatra’ necklace was to remain very popular for over a decade

The Collar necklace had its peak of popularity around 1900 as ladies sought to emulate the British Queen.  Alexander wore a wide diamond set collar to cover a small scar on her neck later in the 1940s the collar necklace sometimes resembled an actual collar with the two sides tied together with a chain.

Festoon necklace, or Garland necklace and the’ Necklace Affair’

Featuring garlands and swags, gem set or short strings of pearls suspended between two points. A grand necklace of this type was featured in the ‘diamond necklace affair’ in late 18th France and was even said to have helped bring about the French revolution.

French court jewellers Bohmer & Bassenge were commissioned by Louis XV to make the necklace for his mistress Madame du Barry but as he died before the necklace was finished, the jewellers remained unpaid. They had invested a great deal in the piece which contained 647 diamonds with a total 2800 carats so they tried to sell it to his successor Louis XVI for his wife Marie Antoinette, but he declared he was not interested.

A con man the Comtesse de La Motte persuaded Cardinal de Rohan that the queen really desired the necklace and asked him to secretly purchase the necklace for her.

The grand piece of jewellery was stolen before he received it and apparently whisked away to England where it was broken up. When the story became public knowledge the deeply unpopular Marie Antoinette got the blame, although she had no idea of the scheme, the public were ready to believe that it was her extravagance, fuelling the French Revolution. 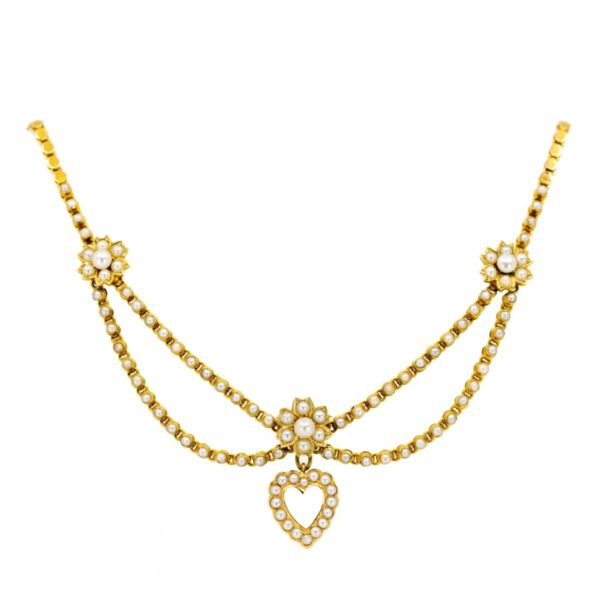 One of the most desired necklace types since its form was discovered in archaeological excavations of the ancient Minoan societies who lived on the Greek Aegean islands, until about 1100 BC when it is thought their civilisation was largely destroyed around the time of a large Volcanic eruption on Santorini. Fringe necklaces feature a series of pendant drops suspended from the necklace designed to be worn at the base of the neck. Victorian ‘archaeological’ jewellery often featured a series of urns as pendants, the style took Europe by storm from 1870’s and evolved to include larger pendant drops. The fringe necklace was re-imagined in the 1950’s with designers favouring a more casual style as in this Cartier sapphire and diamond necklace made for the Duchess of Windsor.

A long necklace often without a clasp, worn in multiple strands can also be worn on the back and fastened at each shoulder

Unlike a bib necklace that starts at the base of the neck, a resille necklace has a choker form at the top but then spreads out to cover the décolletage or upper chest. Resille necklaces are usually constructed of small articulated plaques set with diamonds and coloured gems. A fine version was made for Queen Alexander by Cartier but although much admired in the early 20th century, the form required exacting and costly craftsmanship to allow for movement by the wearer so could not be worn by the majority of women whose lives required them to move more than the necklace would allow

A necklace of individually set gemstones set in a single line though rarely a double riviere is seen. Georgian period riviere necklaces have closed back settings, the gems having a foil backing that helps to reflect the light. Amethyst was used for its strong colouring, but examples set with diamonds, rock crystal or paste are also seen 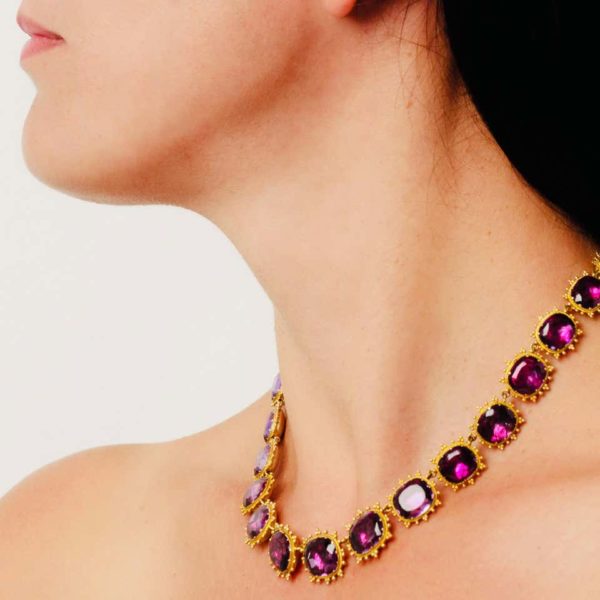 A long necklace worn loosely and sometimes extending below the waist. Very much in vogue in the 1930’s the sautoir which sometimes terminated in a tassel pendant, was flung out as the flapper girls danced the Charleston adding to the wild excitement of the dance and to the Art Deco’s period love of movement and speed

A necklace of small plaques or different individually set stones, in the late 18th and 19th Century the necklace became known as the Grand Tour necklace, with early tourists bringing back examples as souvenirs from their trips to the historical sights of Rome and Pompeii

A stiff band or tube worn at the base of the neck. In Europe an early form of necklace worn by Celtic people of Ireland, Wales, Scotland and North Eastern France. It also has a long tradition in Scandinavian jewellery, produced in wrought metal or silver, the torque necklaces of Danish designer Georg Jensen produced from the mid-20th Century have become design classics 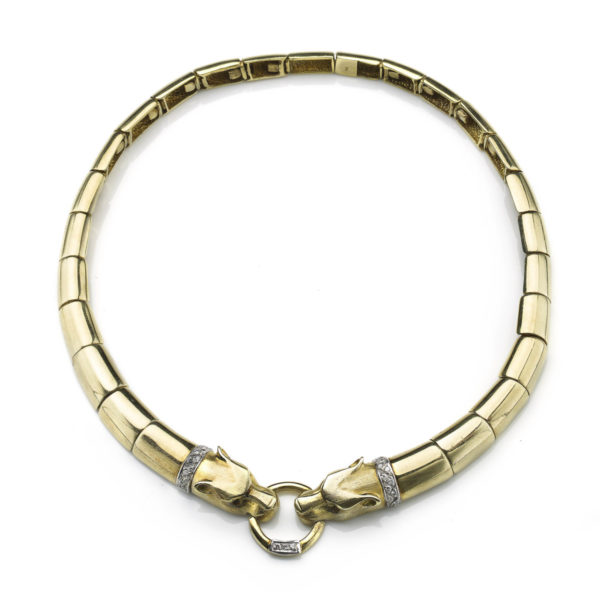