Top 9 Places That Diamonds Are Found

Top 9 Places That Diamonds Are Found

Below is a list of the Top 9 Places That Diamonds Are Found – the top diamond producing countries in 2018, by diamond weight:

Diamonds have been found in Russia since the 18th century.

Russia is home to five open-pit mines as well as fourteen alluvial placers and four underground mines located in Yakutia.  Another big mine is the Grib diamond mine.

Russia diamonds are most commonly known for their eight facets and sharp corners however they also have a good reputation for producing diamonds of all shapes, colours and clarities.

Exploration of Botswana began in the 1950s but diamond mining didn’t begin until 1971; and by the 1980s, Botswana had some of the highest yielding diamond mines in the world. Botswana has now been the second leading producer of diamonds for over a decade

The Jwaneng mine is commonly referred to as “the richest diamond mine in the world.” This mine has been producing around 10 million carats of high-quality diamonds per year.

Diamonds account for about 60% of Botswana’s exports and about 25% of its gross domestic product, making it the most important contributor to economic activity in Botswana.

In 1991, Chuck Fipke and Stewart Blossom discovered a kimberlite pipe full of diamonds close to Yellowknife, in the Northwest Territories and so, the first Canadian mine was opened a few years later in 1998.

But mining is far from easy in Canada. The mines are in remote locations which are accessible only by icy roads, making transporting staff and supplies difficult. Despite these challenges, the diamond industry has thrived and lead to Canada becoming one of the leading diamond producers in the world.

Canadian diamonds are usually white or brown in colour and each Canadian diamond is accompanied by a certificate of authenticity which includes the official polar bear insignia from the Government of the North West Territories.

There have been many spectacular diamonds produced in Canada, including an incredible 552 carat yellow diamond that was unearthed at the Diavik Mine in 2018. It is the largest that has ever been found in North America.

Angola is well known for having an extensive resource of diamond deposits, particularly in the Lunda Norte and Lunda Sul provinces.

3,106.75 carat Cullinan Diamond Discovered at South Africa’s Premier Mine in 1905

6. The Democratic Republic of Congo

Because there are no official diamond producers in the DRC, most of the diamonds in the DRC are discovered through alluvial mining by artisanal miners. 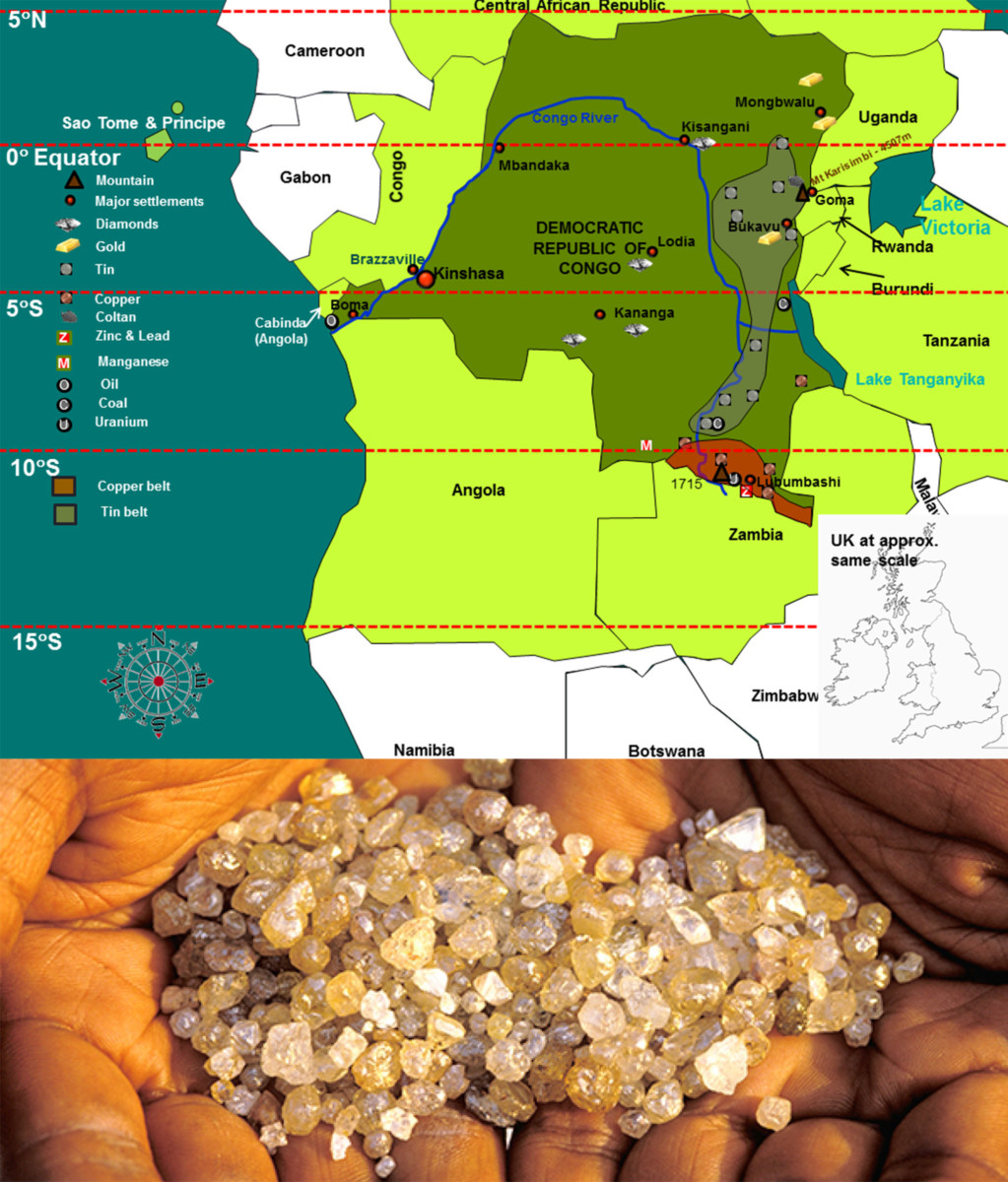 Namibia’s diamond mining journey began in 1908 when a railroad worker found a small diamond in the desert sand. This discovery sparked a huge diamond rush and extensive alluvial diamond mining activity began. Miners quickly developed innovative screening and jigging equipment to allow them to separate the diamonds from the sediment.

In the 1920’s, after World War I, raised beach deposits near the coast were discovered and have been mined continuously since. These beach deposits have produced the highest number of Namibian diamonds to date.

Because the beach deposits were so close to the ocean, miners came up with huge, innovative ships to mine diamonds off the coast of Namibia. These ships have equipment that trawls the ocean floor and scoops up sediment, delivering it to a processing plant onboard the ship. The processing plant detects the diamonds in the sediment stream, captures them and then releases the processed sediment back into the ocean. These incredible ships can process thousands of tons of sediment each day. Their innovative ways have made Namibia the world’s leading undersea miner and more offshore mining occurs in Namibia than in any other country.

The diamonds produced from under sea mining are of outstanding quality. They undergo an incredible journey, from being unearthed from the interior of the African continent to being washed down river and deposited into the Atlantic Ocean, to being transported along the coast by the waves. Of course, any heavily included or fractured diamonds would be much more vulnerable on this journey, therefore it is mostly only the exceptional quality diamonds which have a high average value per carat which survive.

Lesotho may not produce a large number of diamonds per year but the diamonds that they do produce are consistently very large. Some of the diamonds mined yearly are over 100 carats each.

Lesotho has one main mine responsible for the majority of its diamond production – Letseng. It is also developing other diamonds mines including Lemphane, Liqhobong, the Mothae project and the Kao mine.

910 carat Diamond Discovered at Letseng Mine, Lesotho in 2018

Australian diamond mining began in 1908 but it wasn’t until 1981 that they began commercial diamond production. Australia soon became a significant part of the diamond industry.

Originally an open pit mine, the Argyle mine is now an underground operation and produces around 12 million carats per year.

Australia also has two other mines which play a significant part in the mining industry, which is now considered one of Australias most powerful industries. These are the Ellendale and Merlin mines. However, production in recent years has declined sharply because deposits have been depleted and there have not been sufficient discoveries of new ones to replace them.

Thank you for reading Top 9 Places That Diamonds Are Found, you can now learn about diamond History by clicking here